Genocide against the Rohingya, Myanmar

What has happened during the genocide against the Rohingya, and how has the world reacted?

In August 2017, the Burmese military received orders to pillage and burn villages across the Myanmar – Bangladesh border, signalling an acceleration of anti-Rohingya policies that had been developing over the previous decades.

In the first month alone, an estimated 7,000 civilians were killed, of which 730 were children, and by the end of the first year of the crackdown, at least 24,000 were killed. Over the following four years, efforts by the military government to displace and persecute the ethnic Rohingya Muslims have culminated in the mass exodus of 880,000 into neighbouring Bangladesh and placed them in dangerous and cramped refu- gee camps. However, from March 2019 Bangladesh stopped accepting fleeing Rohingyans, further destabilising an already volatile situation into a ticking time bomb.

Under the dual civilian and military government of Aung San Suu Kyi, it was the military that led the genocide against the Rohingyas, and since the military coup in February, they have had no opposition in their brutal treatment of the ethnic Mus- lims. The Burmese government refuses to refer to them as Rohingyas, instead using the derogatory term Bengalis, implying that they never belonged in Myanmar, despite having been there for centuries, with younger generations of established Rohingyan families attempting to flee their home country due to the violent oppression they faced in Myanmar. For those who remained in Myanmar, every day is a battle for survival against their oppressors, who attempt to suffocate the ethnic group through promotion of anti-Rohinyga propaganda, removing their social rights and freedoms and no long- er recognising Rohinyga as one of the 135 registered ethnicities within Myanmar.

Despite the situation in Myanmar, the international response has been alarmingly slow. Surprisingly the only resolute action to be taken against the Burmese government has come in the form of a criminal case brought by The Gambia, a small country in West Africa. Currently the UN mission in Myanmar is reported to be largely ineffective, with a lack of plans and funding for long-term development in the area. Governments around the world need to be told that this is an issue that people care about, and that the Rohingya people should not be abandoned. More aid needs to be given by the UK government to help those in refugee camps, and for harsher sanctions on the Burmese military government.

Due to the brutal violence targeted towards Rohingya people in Myanmar, more than 800,000 now live in the refugee camps set up in Bangladesh after fleeing from their native country. These camps have many major problems due to a lack of organisation and infrastructure, as Bangladesh struggles to find the funds for these camps after the pandemic. Overflowing with disease, the camps are congested and unsafe, leading to mass illness within the refugee population, who lack healthcare. Not only is there an insufficiency in healthcare, but the movement of all those within the camps is heavily restricted. Access to education and opportunities for the Rohingya’s who fled is extremely limited, with the small number of those allowed to receive schooling, experiencing low quality education. The possibility of progression and rebuilding their lives seems non-existent for these thousands of misplaced people, due to a lack of support from any collective of authorities.

The dangerous conditions have led to the deaths of many in the camps, due to a large fire within the compound, trapping people behind the barbed wire, burning them to death and leaving 45,000 homeless. This is only one of the many problems that the Rohingya’s face. In addition, armed gangs are vying for control over the camp, in a bloody battle that has involved murder, rape and theft. A harrowing story recently came to light, detailing the murders of three teachers, two volunteers and students at the hands of a large group of gang members. Violence against women is prominent, with the Rohingya women fearful to walk around the camp, due to the chance of being kidnapped or raped.

These events have been largely ignored by world media, with most attention brought upon the situation through the assassination of Mohib Ullah, a Rohingya leader, rumoured to have been killed by members of the ARSA, due to his refusal to work alongside these violent gangs. His death and the deaths of all those within the camp highlighting the desperate overall situation within these camps and the hardships that these refugees are facing day to day, despite having fled their homeland. 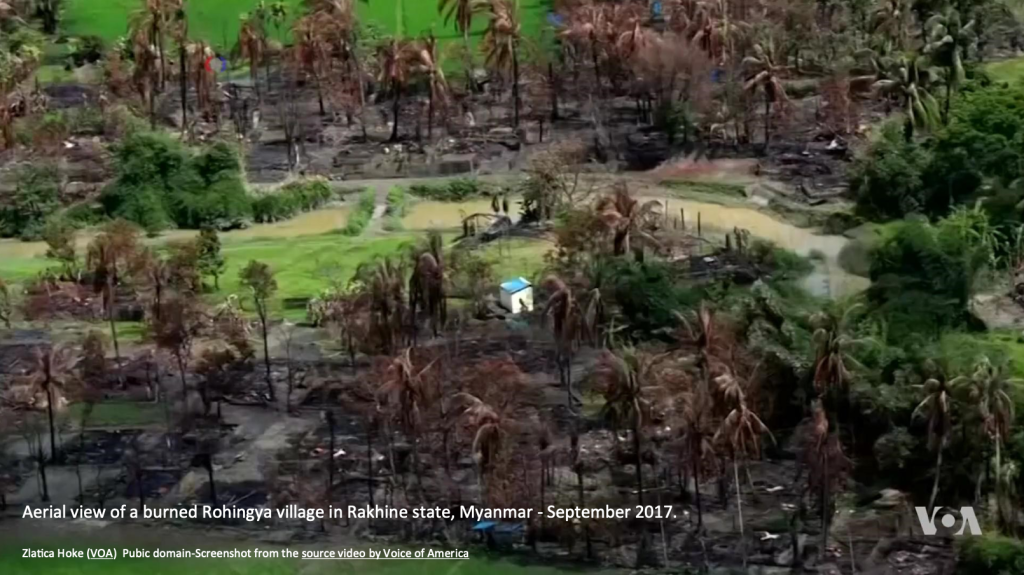